After three fun-filled days in ports, the last two days of our cruise were spent at sea. I was a bit surprised at how cool it was on the water. I had envisioned hot days spent lounging in the sun...not the case! It was partly cloudy, and quite breezy on the pool deck, but we still found plenty to amuse ourselves!


We saw a great magic/comedy show by Eric Buss. He was on America's Got Talent a few years ago, and now travels doing his act. Grant was so impressed that he decided he wanted his souvenir of the trip to be Eric's "How To" DVD. He was thrilled to get his picture taken with Eric, as well as get the DVD autographed. 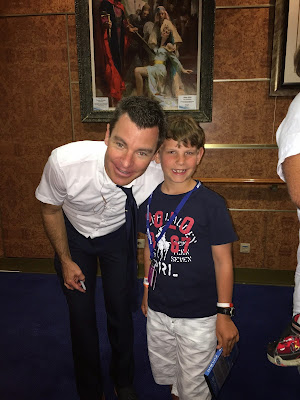 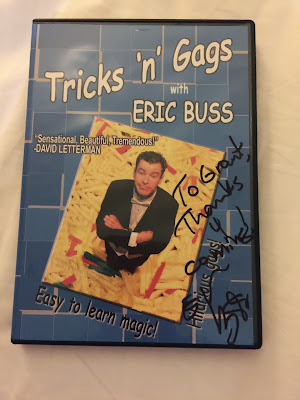 We played several games of shuffleboard. Boys vs. Girls, Kids vs. Parents, and every combination in between. Some of the games were pretty close and the competition was fierce! 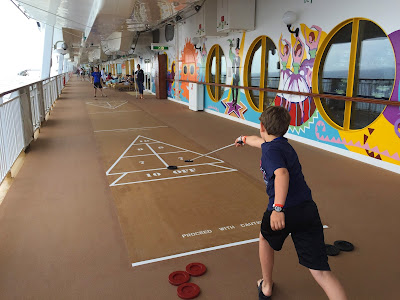 We played Bingo in the lounge. While we were hoping to win big bucks, it didn't happen. But it killed a couple of hours and the kids had fun anticipating a win! 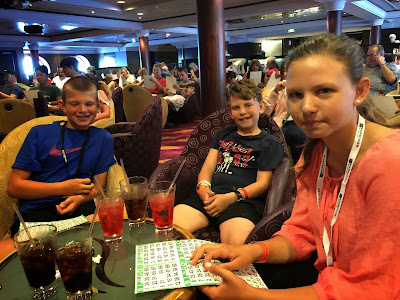 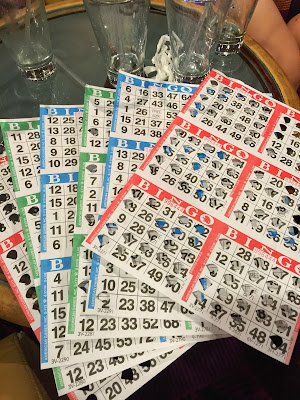 We watched a few movies in our room. More like the kids watched movies while Steve and I took naps! It was awesome! 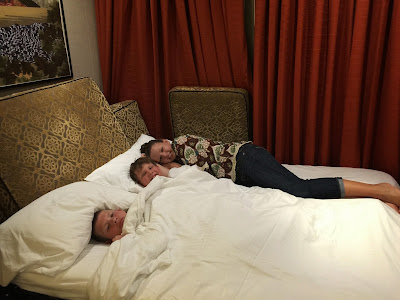 We enjoyed more amazing food than should be legally allowed. Jack was the most adventurous of the kids, and tried something new at nearly every meal. He even ate sushi...and gave it a thumbs up! The Japanese Sushi restaurant was probably our favorite meal all week! 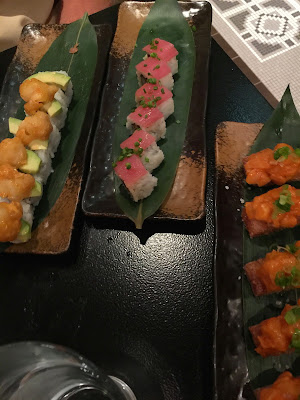 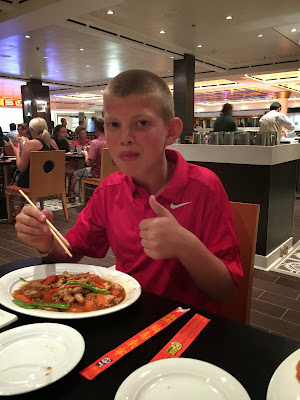 One of my hesitations about a cruise was the fear of getting Norovirus or some other crazy bug. With all those people in a contained space for an extended period of time, it's easy for viruses to travel like wildfire.

I was impressed with Norwegian's cleanliness. Staff members were constantly cleaning the general areas of the ship, and stationed outside of every restaurant was a staff member with a spray bottle of hand sanitizer, along with an automatic dispenser. The staff member would spray your hands and say "Washy Washy"...then as we rubbed our hands together, they would smile and say "Happy Happy"! It became our family joke...and stuck for several weeks after we returned home! 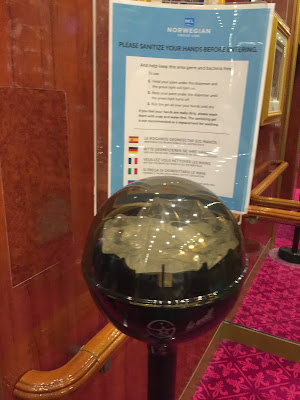 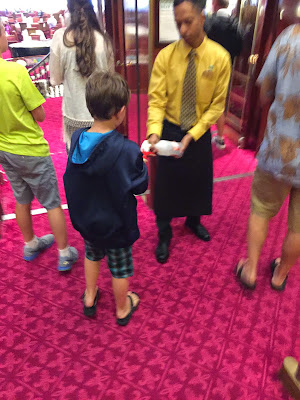 Every night while we were at dinner, our room steward Juniper would come and turn down our beds and leave a towel animal of some sort on the bed (or toilet!) with the schedule of events for the next day. These were some of our favorites. 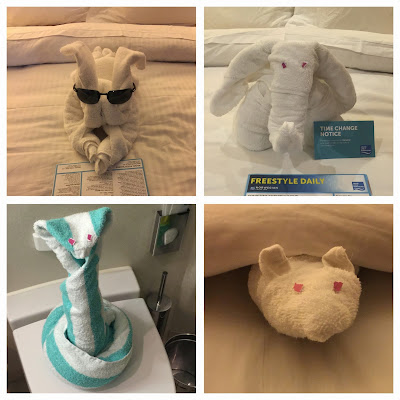 The kids were amused by our Butler, Chris. Grant called him a few times making movie requests or asking other questions about activities on board. I was really proud of his courage in picking up the phone and calling, all on his own. 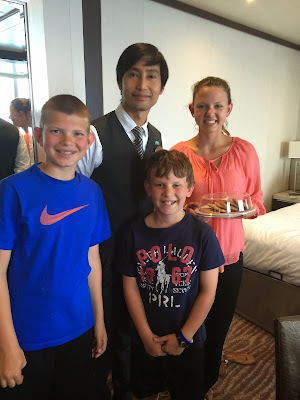 At the end of the show on the last night, nearly 200 staff members, representing every department on board the ship, came on stage to a rousing standing ovation.

It was really impressive to see how many staff members there are on a ship, and how hard they work day in and day out. Their contracts are for a minimum of 8 months, 7 days a week without a single day off. Most were from the Philippines, and many had young children back in the Philippines living with grandparents. I got a little emotional (big surprise, I know!) seeing all of them on stage, realizing the sacrifices so many were making in order to provide a better life for their families. 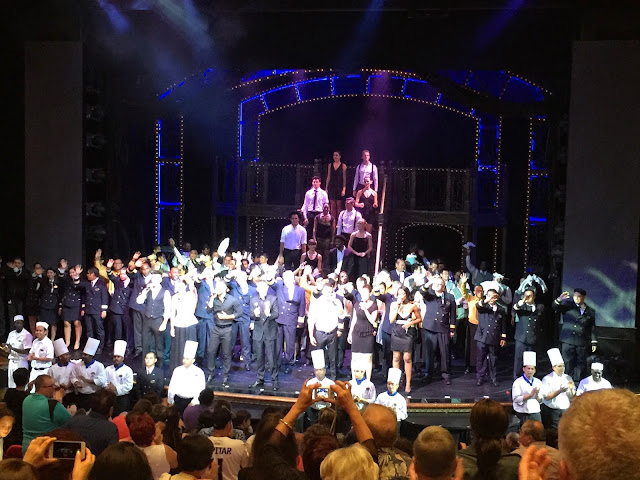 We so enjoyed the time together as a family. Our time with all three kids at home is quickly coming to an end...just two more spring breaks with Olivia before she heads off to college. 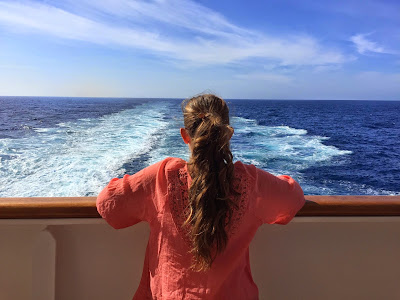 I feel so blessed that our kids enjoy each other's company and are good buddies (most of the time!). I hope those relationships continue as they grow into adulthood! 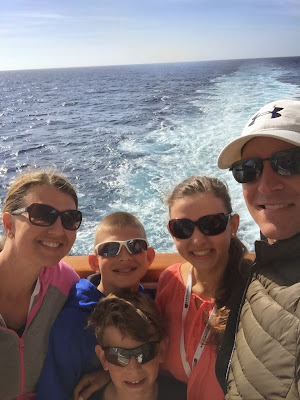 Steve and I commented that we were both pleasantly surprised with how much we enjoyed the cruise. It was a good mix of sightseeing and adventure, along with low-key relaxing. We will definitely do another one! 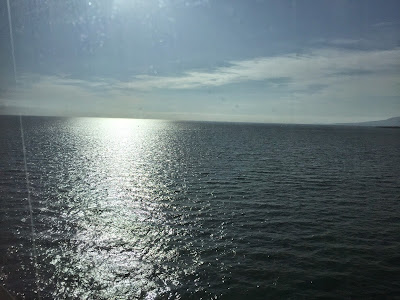