I grew up in Portland, where it rains 300 days out of the year. And from October to May, you never go anywhere without multiple layers, as the damp air is brrrrr....cold!

When I first moved to Southern California nearly 15 years ago, I couldn't get over how people wore short sleeves and shorts on Thanksgiving and Christmas Day. Winter was for warm, cozy sweaters, sweatshirts, and the like.

Now, in Northern California, it isn't quite as warm as it is down south. We do wear sweaters and sweatshirts and long pants for most of the winter. But every now and then, the sun will warm us up to the point of the kids complaining that they're hot. Grant is especially likely to complain of being too warm...that boy would be naked every day if I let him.

We had a stretch of sunny weather this last week, a much needed break from the rain that has been falling since January. Grant was playing outside all by himself one afternoon, content and happy and completely self absorbed. I peeked out the window to check on him, and this is what I saw: 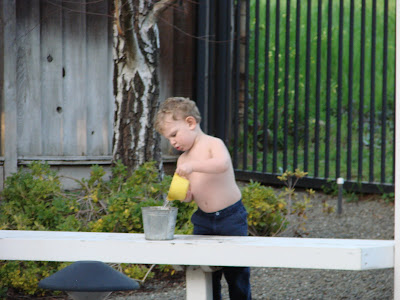 He was making "chocolate pie", and apparently spilled some water on his shirt, while he was running back and forth inside the house to the bathroom to fill up his cup (this explains the mysterious water path going through the house...). 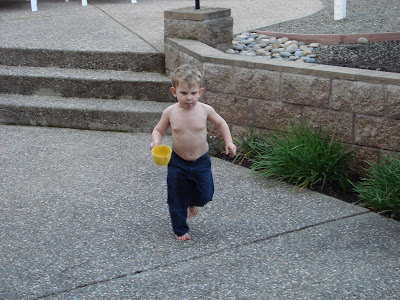 Rather than come get a new shirt, or just deal with the wet one, he decided it was a good excuse to undress a bit. Makes perfect sense to me!
Posted by Alyson at 5:42 PM 3 comments:

Jack has always been a good sleeper. He can fall asleep anywhere, anyhow, it really doesn't matter. He's passed out on the cold, hard floor at a church meeting and at the table eating dinner. He'll sleep sitting up, laying down, or anywhere in between. He sleeps when he's tired, he sleeps when he's nervous or anxious about something, he'll sleep if he's bored, when the sun is high or the moon is shining bright. He never suffers from insomnia...lucky boy...

The other night, I came home from a meeting and found Steve and the kids on the couch watching TV.

This was how I found Jack. Tell me that looks comfortable. 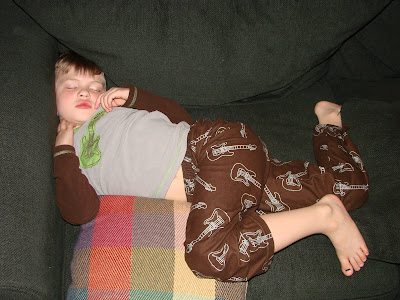 I hope he's always able to sleep when he needs or wants to. Though if it holds true that kids do most of their growing when they're sleeping, he may turn out to be ten feet tall.
Posted by Alyson at 1:05 PM 4 comments: 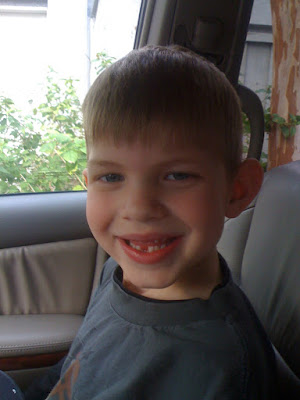 When Olivia lost her first tooth the summer after kindergarten, it was cause for huge celebration. She had barely closed her eyes when the Tooth Fairy magically slipped into her room with a handwritten note congratulating her, along with a crisp dollar bill. The next morning, I woke up before she did and eagerly awaited her enthusiastic entry into our room announcing that the Tooth Fairy had visited while she slept.

Jack lost two teeth last summer after an unfortunate tumble out of bed while camping. That was traumatic. I'm pretty sure the Tooth Fairy paid him a visit, but I don't remember the specifics. This week, after weeks of it hanging by a thread, literally, he finally lost his first tooth naturally. He pulled it out at recess while he was at school this week. He took the tooth to the office, where they gave him a special tooth holder necklace to keep it in until he came home.

Tuesday night, he borrowed the tooth pillow from Olivia, stuck his tooth in the pocket, and put the entire pillow under his pillow. Wednesday morning arrived, and a very disappointed Jack came moping in announcing that the Tooth Fairy hadn't come. I gasped, and threw my hand over my mouth before an inappropriate word escaped. I told Jack that maybe she hadn't been able to find the tooth, since it was hidden so well under him and he was fast asleep and she didn't want to wake him up. We agreed that Wednesday night, the tooth pillow would wait on the dresser.

Wednesday night, as Steve and I climbed into bed, he looked at me and asked if the Tooth Fairy had come yet. Oops...so he ran downstairs and fished two crumpled up dollar bills out of his wallet, took the tooth out of the pillow and replaced it with money.

This morning, Jack was thrilled to announce that the Tooth Fairy had found him last night, and left him two whole dollars!

I fear that by the time Grant starts losing teeth, the "Tooth Fairy" won't even wait until he's asleep. She'll just throw him a buck or two and be done with it.
Posted by Alyson at 9:24 AM 5 comments: