Today was my birthday. I woke up grumpy. I didn't want to face the fact I was getting older.
Steve's mom, Joyce, has been here all week. She made a delicious birthday breakfast. We then took a family bike ride down to the park to play. As we were riding, I was at the back of our little pack. As I watched them ride ahead of me, I was overcome with emotion, and love, for this family of mine.
We had a fun shopping excursion this afternoon. I picked out my own birthday gifts—a new gym wardrobe, some new make-up, and my first perfume in nearly 13 years. I chose a Versace, which I've been sniffing and loving all afternoon.
My mom called me this afternoon to wish me happy birthday. She gushed about how happy she was to be my mom, what a joy it was to have me as a daughter, then said "I just can't believe you're 35!"
There was a moment of silence, after which I replied "Well, that's good. Because I'm actually 37."
Life is good. I am happy. And while I don't necessarily love getting older, I love my life, and those in it. And that is reason to celebrate.
Posted by Alyson at 8:15 PM 7 comments:

Today was a Monday...in all senses of the word. Not only was it hard to get out of bed this morning (partly due to the fact that I stayed up way too late because Steve was out of town), but it seemed that nothing went quite right.

Last night at bathtime, the water wasn't getting warm. I had been doing laundry all day, so thought at first that perhaps I'd used up the hot water. Unlikely however, seeing as we have a 75 gallon tank. When Olivia got in the shower this morning, it still wasn't more than lukewarm. I called the company that installed the tank a year ago and scheduled a service call. When the guy showed up, we went to the garage. After looking at the tank for about 2 seconds, he adjusted the temperature knob from "LOW" (don't know how it got there...the only thing I can think of is that someone, perhaps a certain 3-year-old whose name starts with a G and ends with a T, messed with it during the yard sale over the weekend...) to the normal heat range, and said "OK, that'll be $65 for the service call." Seriously??? Why didn't I think of checking the knob first?
I got a call from school right about this same time, saying that Olivia was in the office complaining of an itching eye and it was bright pink, and could I please come pick her up. I wanted to tell her to stick it out for an hour until school was out...but couldn't really do that, in case it was pink eye and contagious. So, I grabbed Grant (naked except for his underwear), my keys, a Diet Coke, and jumped in the car, drove to school and picked her up. I brought her home, she finished her homework, then we turned around and made the same trek out to pick up Jack and the other two kids I bring home on Mondays.
In order to avoid an absence tomorrow (for my sake, not hers), I drove Olivia to Urgent Care to make sure there was no pink eye involved. The doctor said "Looks like an eye allergy. There's some great over-the-counter drops, but they are expensive. It's probably cheaper to get the prescription drops, since your insurance will cover them. They're virtually the same, and will do the exact same thing, but you won't have to pay as much." That sounded good. We left the office, headed to the pharmacy, waited in line at the drive through lane, and when our turn came, was informed that our co-pay on the drops was $75.00. Again, Seriously??? Forget that, we parked the car, unloaded the kids, went inside, and bought the over-the-counter drops for $11.69. Seriously??? Something is gravely wrong with this system, that an insurance company will charge $75.00 for something that I can buy over the counter for $11.69.
My day was not nearly as productive as it should have been. I am fighting off a cold, and I am hoping I win the battle. Tomorrow is a new day. All three kids will go to school. I'll have a new perspective. And new opportunities will arise for me to use good judgement, common sense, and hopefully save a buck or two.
Posted by Alyson at 5:24 PM 4 comments: 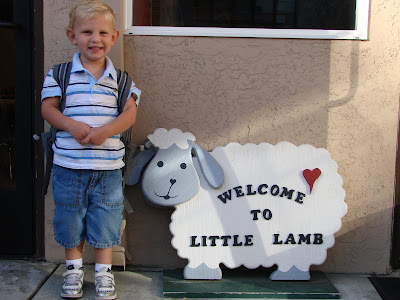 My baby boy started preschool this morning. It is a milestone 10 years in the making. I have no baby in my belly, on my hip or my breast. I will have six hours, two days a week, completely to myself, to do whatever I choose.

As we were dropping him off today, with his little Batman backpack and Superman lunchbox, he was independent and happy. We had visited the classroom last week and met his teachers. He saw where the bathroom was in his classroom . . . and even tried it out (announcing loudly as he was peeing "The bathroom works mommy!")

There were a few kids crying and clinging to their parents this morning. Grant looked at me with this perplexed expression, as if to say "Why on earth are they crying? This is AWESOME!" He walked in, we pinned on his nametag, found his cubby and placed his backpack and lunchbox inside it. He went potty, then found some cool cars to play with. I knelt down next to him and asked if it was okay for Steve and I to go. He said "Yep!" I kissed him, told him I loved him, and to have a great day. Then I turned and walked away.

Letting go is an important part of parenthood. We do our best to raise independent, well-adjusted children. To teach them kindness, compassion and respect. Now that the time is here to begin the letting-go process for the last time, it is bittersweet. There is peace in knowing that he is secure enough in our love for him to know that we'll be back for him, and it's okay to be away from mom. There is joy in knowing that he is well-adjusted and happy.

When we got outside, Steve looked at me, smiled, and said "We did it honey! This is a big milestone...how does it feel?" At that moment, the tears started rolling, and all I could say was "Lonely."
Posted by Alyson at 10:34 AM 5 comments:

My dad is a dentist, and my youngest brother is currently in his 4th year of dental school—the same school my father attended 30 years ago.
In a recent alumni newsletter commemorating the graduating class of 1979, graduates were asked to submit their favorite dental school memory. 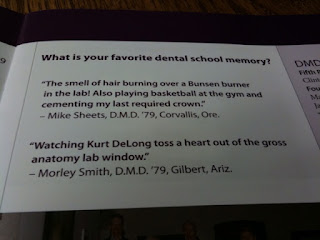 My dad is Kurt DeLong.

I saw this while on a recent trip up to Oregon to visit my dad. I asked him about it...I wanted to hear the story behind this! Dad flashed his smile, which I adore, and said "Honestly, I don't remember that."

Dental school is an intense 4 years. Anatomy was not my dad's favorite class. While he excelled at the clinical portion of school, the lecture and lab series were a little more challenging. In a way, I can imagine one of his lab mates handing him the heart to feel, and my dad being grossed out and flipping it off his hands. But out the window? Who knows? Imagine the surprise of the innocent passerby walking below, when "SPLAT", a human heart lands right in front of them.

On the other hand, this is the stuff that legends are made of. Perhaps the heart slipped out of dad's hand, and the rumor mill started and by the time 30 years have gone by, it didn't drop on the floor accidentally, but rather was tossed out the window.

Regardless of how and whether it actually happened, I think it's hilarious to see that that moment was Morley Smith's favorite memory of dental school. Must have been a rough 4 years...
Posted by Alyson at 8:48 AM 3 comments: