Steve's mom has this expression . . . anytime she has to do something hard, painful, or otherwise unpleasant, she says "Tough & Mean", meaning put mind over matter and get 'er done. This expression has carried over into our family on many levels, whether it's a scraped knee, exhaustion, or just something new and a little scary.
After a month in a cast, we headed back to the orthopedic doctor this week for Grant's follow-up. Steve and I are both firm believers in being honest with the kids. So when Grant asked us if it was going to hurt, we said it might, but that he was strong and brave, "tough and mean", and it wouldn't last for long.
While we waited, we did our best to distract him from thinking about it too much. 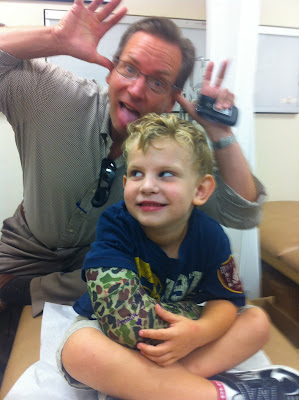 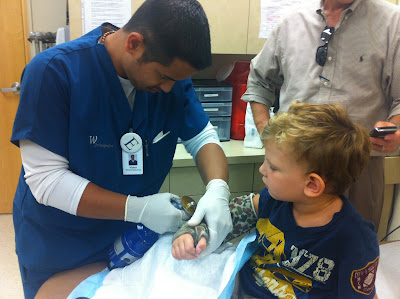 Since they had to cut Grant's first cast off to put on a higher one, the rotating saw was no big deal. Grant giggled through the whole thing, saying it "tickled" his arm. 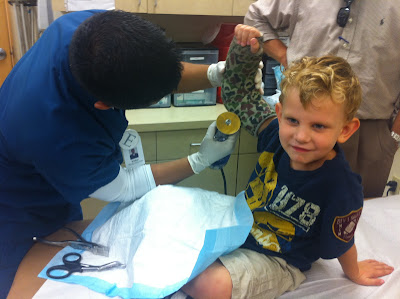 When they pried the cast off, there was his little arm, slightly shriveled, and covered in dead skin.
Next it was down the hall to get a new X-ray taken. Grant held his arm close to his body, afraid of moving it.
Dr. Schwartz, the orthopedist, came into the exam room, looked at the X-rays, and said that things looked good, there was evidence of new bone filling in the fracture, and he felt like it was time to remove the pins. 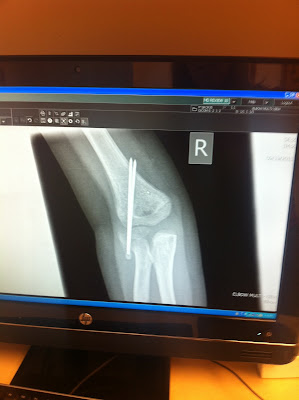 He gave us two options:
Option 1—take Grant back to the Operating Room, put him under general anesthesia, and pull the pins out.
Option 2—Pull the pins right then and there, with no anesthesia or sedative. He said it would be mildly uncomfortable, but that if Grant resisted, he could stop and schedule an OR.
The risks of general anesthesia (not to mention the expense and no food/drink for 8 hours prior) seemed a bit excessive for something that would only take a couple of minutes. The doctor asked how stoic we thought Grant would be, and then he looked at me, and asked if I thought I could handle it. Seriously??? After very little discussion, Steve and I opted that if at all possible, we'd like to try and have the pins pulled right there.
As the doctor was getting things ready, Grant laid back and with tears in his eyes, asked me "Why did you even make me play on that playground? I didn't want to play on the playground!" A little late for that discussion, I think. . .
I stood at Grant's head, with his little face cupped in my hands, trying to keep his eyes focused on me, instead of his elbow as the doc went to work.
He swiftly and deftly went to work, wiggling, prying, and then pulling out two 3+" nails from my baby's elbow. Grant barely whimpered, just said "ow, ow, it hurts!"
When it was over, and we saw the pins laying on the table, both Steve and I almost passed out. The thought that moments before, those had been inside his bones was just more than we wanted to imagine! Steve piped up and said "There is no way I could have done what Grant just did. No way. Knock me out."
They wrapped it in gauze for a bit to stop the bleeding and sent us out to the hallway to wait. As we sat there, Grant said "Well that wasn't so bad!" Maybe not for him . . . 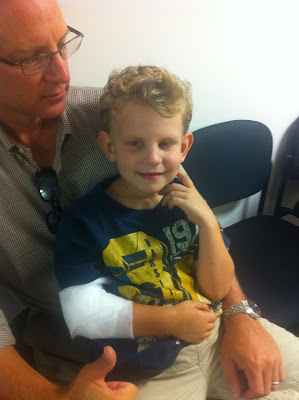 A small bandaid later, and we were on our way. He's still favoring it a bit, and doesn't yet have full range of motion, but he's on his way. No PE, gymnastics, or monkey bars for another month to make sure things are completely healed, but he should be back to full activity in no time.
Both Steve and I are still amazed that Grant handled the whole experience as well as he did. Sure, there were moments of pretty intense pain, and the hassle, discomfort, and awkwardness of being in a cast. But through it all, and especially when they pulled out the pins, Grant has been the epitome of "Tough and Mean" . . . in a nice sort of way :)
Posted by Alyson at 4:33 PM 3 comments:

Now that all three kids are in "real" school, I find myself with a little more "free" time on my hands. I'm working two days a week in the school library, but have two full days and one half day a week all by my lonesome. It's true! The house is so quiet with the kids gone that I can literally hear myself think.
While I try and fill most of my days with productive "housewife-y" chores and duties, I am trying to spend a little more time on me, doing things that I enjoy. A good friend of mine suggested we take tennis lessons—a fun way to get a little fresh air and burn some calories. It is also a good excuse to buy some cute new clothes! Today was the first lesson.
Steve bought a golf cart a couple of weeks ago, and we drove that up the hill to the club today, laughing the whole way. 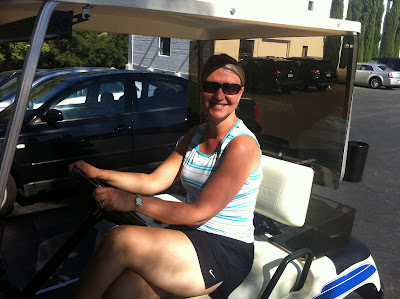 (I'm really hoping it was just the shadows
that make my thigh look so dimpled . . .)
Our teacher is a hard core Brazilian tennis pro. She worked us to the bone, we were both huffing and puffing by the end of the lesson. Amazingly enough, she said my new racket was actually "TOO Beginner" for me! Never thought that would be possible.
Don't hold your breath on seeing me in the US Open anytime soon, but I may have actually found a sport that I enjoy, and can actually play. Who would have thunk it???
Posted by Alyson at 12:52 PM 3 comments:

There aren't many days in the last ten years that I can recall with near perfect clarity . . . with the exception of 9/11/01.

I had just gone through a devastating miscarriage two weeks prior, and was still grieving the loss of that pregnancy and the hopes and dreams that felt like they had been lost as well. I was an emotional wreck, yet trying to still be a mom to a busy toddler.

On that Tuesday morning, I woke up, reached for the remote, and clicked on the Today Show. This had been my morning habit, and I quietly savored those moments until Olivia came toddling in asking for breakfast.

When the TV came on, I saw the gaping hole in one of the Twin Towers, and heard the incredulous voices of Matt Lauer and Katie Couric as they tried to make sense of what was happening. I picked up the phone and called Steve, who was riding BART into work.

"Something crazy is going on," I said. "It looks like a bomb went off in the Twin Towers in New York."

Seconds later, still on the phone, I watched in disbelief as a plane crashed into the second tower. It was like a movie, it seemed impossible that it was really happening.

I was glued to the TV all day, and in the days that followed, watching the images played and replayed over and over again. I listened to the stories of individual and collective heroism and loss. I cried. I looked at my sweet Olivia, who had just turned 2, and wondered how I could ever raise a child in a world where something like this could happen.

A missionary that I had served closely with during my mission to the Canary Islands was working at the Pentagon when the plane hit. He was killed, leaving behind a darling wife.

There were hundreds of images of the day plastered on the TV, newspapers, and magazines. Many were horrifying. Of all the images though, this one seemed to resonate the most with me—The American Flag, rising up out of the ashes. 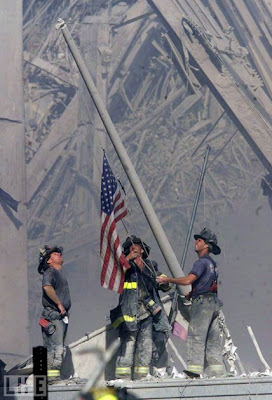 In the ten years since this tragedy, much has changed in our country, and our world. It is strange to hear my five and eight year olds talk matter-of-factly about the "planes that crashed into the buildings". The events of that day happened long before they were born, and they'll never know how things were "before". Yet it has become an important event in the history of our country. I will never forget where I was that day, nor will I forget how blessed I am to be an American.

Posted by Alyson at 8:51 PM No comments: